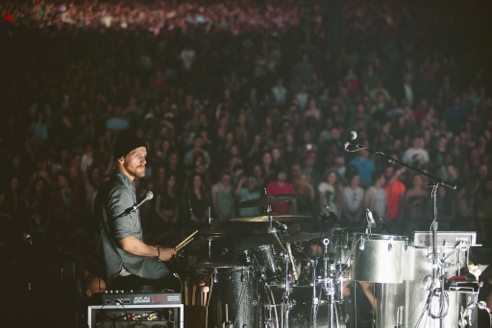 Mark Pontius (born January 3, 1985) is a member of the indie pop band Foster the People, who plays the drums and other percussion instruments.

He has a sister named Rebecca. He grew up in Orlando and was in a band called Malbec, until he decided to give it up for Foster The People. He was about to leave United States and move to Australia before joining the band. He loves candy and is a huge fan of Dunkin’ Doughnuts.

Mark took a few minutes out of his hectic schedule to talk about why he chose Pintech:

When looking to add some triggers to my kit it was really important to me to find something that wasn’t going to look big and bulky and get in the way of my playing. Im a nut about the way things look and feel so I wanted something low profile but still very responsive. The Pintech RS-5 external triggers were just what I was looking for. Really the most versatile trigger I have seen. You can attach them anywhere on your kit and they always stay clear of what matters most, your playing. Right now I have them attached to the shell of my drums and the response is fantastic. A really great simple expansion to anyones setup.