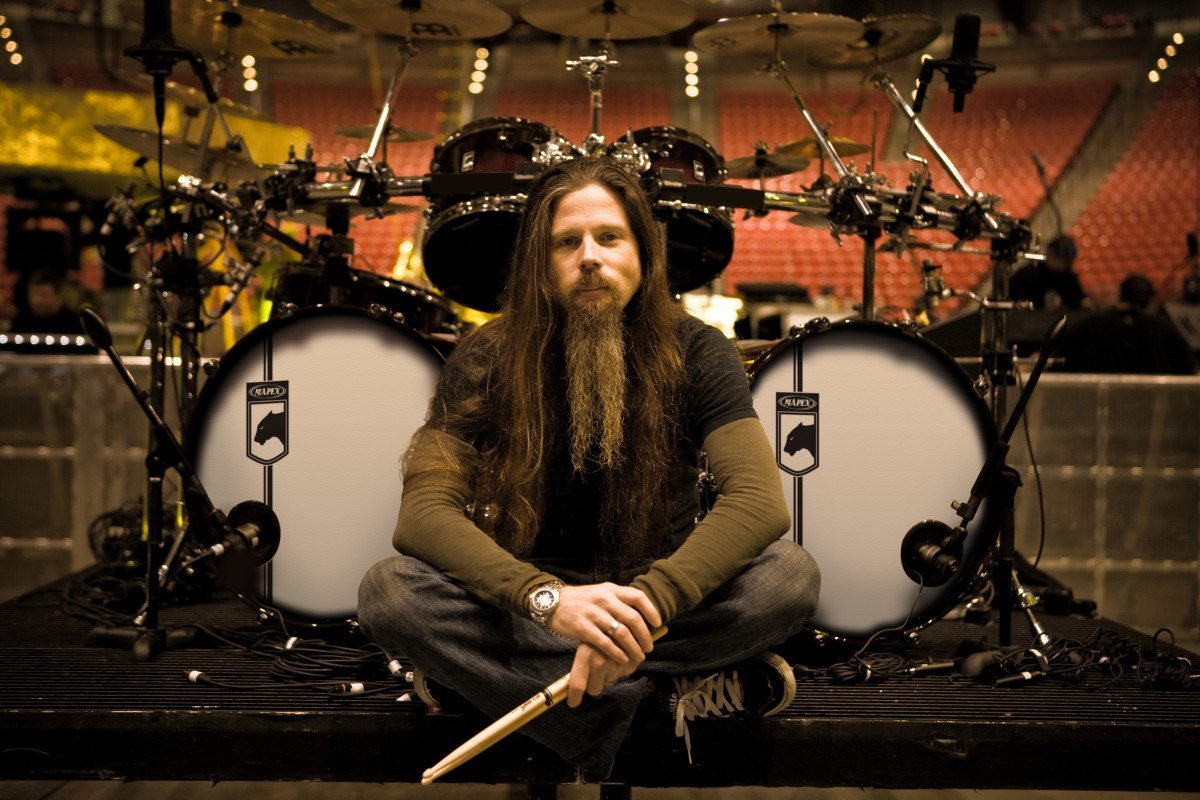 Chris Adler was born in Washington, DC on November 23, 1972. As a toddler, Chris began playing with broken sticks from his backyard on his parents coffee cans. As he grew he studied years of piano with his mother a singer, pianist and performer herself. Through middle school Chris learned alto saxophone and acoustic guitar before settling on studying bass guitar. Through high school and college, Chris performed in multiple bands and recording projects.

Once in college at Virginia Commonwealth University beginning in 1990 Chris quickly met up with musicians in the local area (Richmond, VA). Chris played bass on several records and toured the U.S. from ’91-’94. When at home, Chris tinkered with his first “trading post” drum kit in his apartment bedroom while the neighbors were at work. In September of 1994, Chris met back up with several members of his freshman dorm year experience interested in starting a band. A bass player was already in the mix, so Chris decided to put the bass back in the case and turn to the drums full-time.
“I had spent the time and rolled the dice on playing bass in multiple bands. I had toured the US, been signed to a label and toured the US. By the time I was 21, I figured it was time to move on. Maybe music wasn’t going to work out as I had hoped. I got a job and enrolled in school full time. I picked up a drum kit just for fun. I had always wanted to play.”
The learning curve was extreme for the progressive metal act, soon to be named, “Burn the Priest.”

“I was past the point of teenage idols. I didn’t want to play cover songs or sound like any one drummer. I wanted to learn the best and then retool it in my own way. The very first song I learned was ‘Message in a Bottle’ by the Police. If you’re not a drummer, you might not understand but it’s the equivalent of going for a little bike ride with Lance Armstrong.”
Burn the Priest recorded two 7-inch records, one 14 song full length CD and played hundreds of shows across the US in their 5-1/2 year career. Chris’s drumming helped drive the band and his unorthodox playing choices and agility garnered much attention and praise. The band became the most downloaded metal band of all time MP3.com which caught the attention of several record labels. The band knew that they were breaking the seams of the underground scene and forced themselves to take a leap of faith.
In the winter of 1999, the band replaced a guitar player, changed their name to Lamb Of God and signed with Prosthetic records. By September 2000, the groups’ debut CD New American Gospel was in stores and Chris was quickly approached for his first article in Modern Drummer Magazine. Chris’s atypical style, timing and speed combined with the progressive guitar work made this release stand out from the many of the underground cookie cutter metal bands of the time.

“To this day I play the drums the same way I played guitar. I riff. I focus on syncopation with the guitars and finding a universal pulse within the music”
Two years on the road followed with Chris continuing a rigorous, daily practice schedule throughout. In addition to the time spent improving his chops, Chris also took on the managerial role within the band. Working with a booking agent and legal rep, Chris helped strategize the moves, tours, videos and press the band would engage in. From 1994-2005, Chris was the conduit of communication, decision-making and organizational growth for the band.

In May of 2003 the band released its sophomore effort, ‘As the Palaces Burn’. Chris had harnessed all of the loose ends and his playing had matured. His phenomenal performance on this album helped land write ups in Rolling Stone Magazine, claim the Record of the Year Award for 2003 in Revolver Magazine and put the band in contention for a Grammy nomination in the Hard Rock category.
It wasn’t long before the big players in the industry came knocking and in September of 2003 the band signed to Epic/Sony records. The bands fan base continued to multiply as the band spent the better part of the next 12 months on the road and now had 4 videos in rotation on MTV2. Chris was now well known in the scene for his playing ability and was termed “a landmark to judge all extreme players by” by Modern Drummer.

On August 31, 2004 the band released its full length offering, ‘Ashes of the Wake’. Once again, Chris’s playing continued to evolve, this time branching further into progressive territory with more unusual and stylistic choices throughout the recording. The album’s first week sales landed the #27 spot on the Top 200 Billboard Charts. The album landed them on many high profile tours including a headlining slot on Ozzfest 2004. During this album cycle the band released the platinum selling DVD Killadelphia, highlighting the bands performance and personalities on and off stage.
“This was the point when I couldn’t keep up with everything necessary to run a successful business and be creative at the same time. Touring overseas left me with $1000 phone bills trying to arrange freight, merchandise and transport for the next tour. I had to decide if I was going to manage or drum, and I was happy to bring a manager in. This allowed me to focus on the art and get my head out of the soul crushing business side of the game. We had come further than anyone expected and keeping my pencil sharp was a big part of that.”
In 2005 Chris was asked, and performed at the prestigious Modern Drummer festival, his performance garnered a standing ovation at the event and landed him on the ‘Best of’ Modern Drummer Festival DVD in 2008. Chris was voted the Drummer of the Year in the Modern Drummer magazine Readers poll.

The same year Chris recorded and released a self-written and produced track on Drum Nation III CD on Magna Carta records with long time friend and guitar virtuoso Ron Jarzombek.
In August of 2006, the band released ‘Sacrament’. The album landed at #8 on the Billboard charts, was nominated for a Grammy and was the highest selling metal album of the year. ‘Sacrament’ was praised as album of the year from critics across the world and Chris and the band toured for 22 months in support. Chris landed cover articles in Drum!, Rhythm (UK) and Modern Drummer magazine for the incredibly diverse and powerful drum recording. Chris was awarded Metal drummer of the year once again by Drum! Magazine.
The band once again received a platinum sales award for the DVD chronicling the trek entitled ‘Walk With Me In Hell,’ and Chris was invited to write a regular column in Modern Drummer Magazine.
Chris is well known for his footwork and unique rhythmic choices, which are once again represented well here, but the drumming on this album also showcases a significant growth in his grasp of the instrument including dynamics, dexterity and a further understanding of polyrhythms and syncopated rhythmic structures.
Never satisfied, Chris pushed himself for more in the writing sessions for the followup effort, ‘Wrath.’
“As I listened back to ‘Ashes of the Wake’ and ‘Sacrament’, I could hear the development and evolution of my playing, but not as drastically as I could when comparing ‘As the Palaces Burn’ to ‘Ashes of the Wake’. I wanted to take the next BIG step with the next record. Admitting my weaknesses and addressing them directly was the direction I chose and succeeded in doing.“

‘Wrath’ represented a big step for Chris and the band. Released in August of 2008, ‘wrath’ debuted at #2 on the US Billboard Sales Charts. The record debuted top 10 across the globe and #1 in several countries. The band spent over two years on the road supporting the effort, which garnered two additional Grammy nominations. The album also allowed the band to break into extensive new world markets. The drumming on ‘wrath’ is unparalleled workout. While maintaining the footwork and unique time and structure choices, Chris drastically improved his hand and foot speed opting to push tempos and time. The combination showcased a dexterity not heard on any previous Lamb of God recording.

In March 2010, Chris set off on his first clinic tour entitled ‘ A Throne With A View.” The tour crossed the US and drew record number of attendees. This effort landed Chris the Metal Drummer of the Year, Educator of the Year and Clinician of the Year awards from Modern Drummer magazine.

Upon returning from the solo tour, the band met to begin the writing process for their 7th full length studio record in their now 16 year career.
“I’ve never heard any one say that their favorite record from any band was the 7th one. Never. That is what I felt we were up against and we had everything to prove. We’ve covered a lot of ground in 16 years, so what can we do push further, be better and defy the odds. That is what I asked myself every day before heading to the studio.”
Chris recorded the drums in July of 2010 in Spin studios with friend and long time producer and engineer Josh Wilbur. Chris tracked 17 Lamb of God tracks and two tracks as a guest drummer on the 2012 Testament record.
Once the recording was complete, Chris selectively chose to perform in September 2011 at the La Rioja international Drum Festival in Spain. One of the largest drum festivals in the world, Chris taught a master class in the afternoon and performed to a record crowd in the La Rioja Arena.

Making the most of the downtime and in a move to the left, Chris recorded drum tracks with William Shattner for a re-release of the infamous “Rocket Man” in November of 2011.
The highly anticipated release of Lamb of God’s ‘Resolution’ occurred in January of 2012 and has set the band on path of a two-year world tour. The album debuted at #3 on the Billboard Charts in the US and top 5 in most countries around the world. As Chris predicted, the album focuses on the diversity found across all of the previous records, celebrating the unique moments that only Lamb of God can create.

“When you get to a certain point in a publicly judged venue of a career, it’s often hard to please everyone. We focus on ourselves. We are our harshest critics. If the five of us can feel good about it, then we’ve achieved our goal. It seems to be contagious and the snowball continues to grow. I’m very lucky to be able to do what I do and I take it seriously. I want to be the best I can be for my band, my family and myself. I’m driven to never regret.”

‘Resolution’ contains musical moments never explored by the band including more progressive song structures and layers of strings and female vocals.
“We are all very proud of the record. I put myself through a brutal boot camp of diet, exercise and rehearsal to bring out the very best in
myself. It’s hard for me to judge today, but I predict, like all of our previous records, I will look back with pride. My focus now is to bring my A game to the stage and never look back.”
Lamb of God is currently booked until September of 2013.

Chris has been awarded drummer of the year once again and is scheduled to pick up several international awards in London in Spring of 2012.