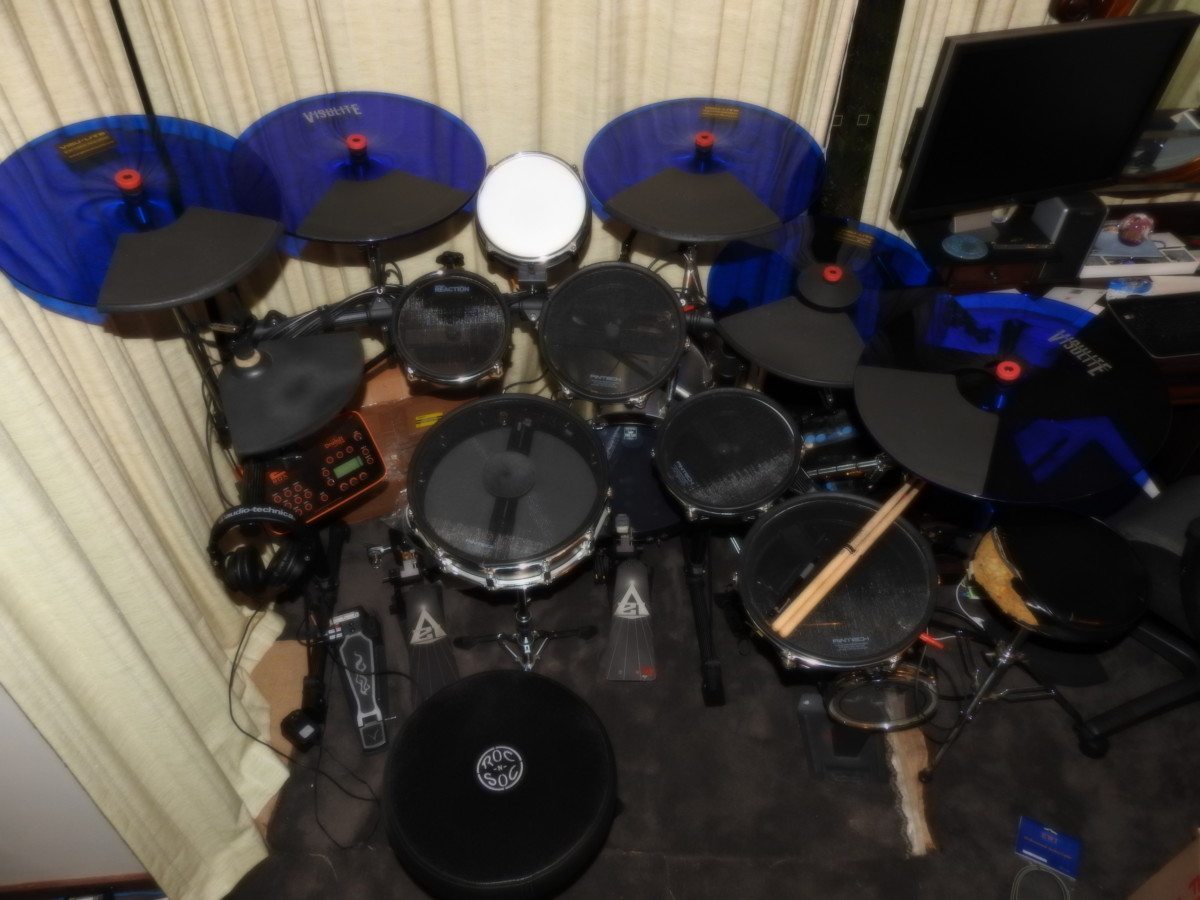 Altho a long time rock drummer for over 45 years, my journey into E-drums has been relatively recent one.

I play in an 80’s retro band and we try to clone the songs rather than just cover them. So authentic drum sounds from the period are important to make the show believable. Most important of all, the drum clobber needs to be well made to stand up to the rigors of live gigging and lots of traveling to rehearsals and practices at home and the old set I had been using was beginning to fail electrically as well as mechanically.

I was introduced to Pintech percussion gear only recently and purchased of a set of 3 second-hand Visulite cymbals to replace my aging and increasingly deteriorating single zone plastic cheapie cymbals, and a set of 4 Concertcast Toms , 1 x 8″, 2 x 10 and a 12″ (all dual zone) and a Phoenix 14″ dual zone snare. The drums came fitted with Pintech single ply mesh heads.

The Visulites are beautifully finished glossy 16″ and 18″ dual zone crash cymbals with choke and an 18″ 3 zone ride in a deep “Translucent Blue” and hung up on Aquarian red (light) cymbal spring mounts.

My only real gripe with the cymbal design is the direction the pigtail lead exits the trigger box.

I use my E-kit for practice, rehearsals and gigging which places great demands on hardware with constant setting up, plugging/unplugging, playing, pulling down/packing up and loading in and out blah blah.

The pigtails exit the cymbal trigger box straight down about 250mm long terminating in a sturdy metal TRS female socket.

This makes the cymbals more tricky to box up and transport as I can see the pigtails possibly failing where they exit the trigger box due to being compressed around a sharp corner when the cymbals are just packed together to travel in a box, unless a funky method of keeping the cymbals spaced apart in a custom made case are employed.

Having the leads exit the trigger box inline with the surface of the cymbal and heading towards the bell area might be worth investigating. The leads then can be secured against the cymbal stand with a velcro strip still allowing plenty of flexibility for cymbal swinging without stressing the leads and making it easy to stack the cymbals against one another without fear of squashing the leads and possible lead failure over time as might eventually be the case now with repeated and heavy handling.

Secondly, the pigtail female metal plug ends hang around and scratch the other cymbals with repeated handling. Perhaps plastic covered plug sockets could be useful or maybe add some heatshrink tube to the existing metal jobs which is what I do. No biggie, just an observation for those of us that work live and handle/transport their E-kit gear a lot.

These Visulites, plugged into an old Roland TD-10 module played reasonably well straight out of the box with some small adjustment for gain on the ride only and a change to the velocity curve of the crashes to suit my playing style.

I immediately noted the realistic feel/feedback I got from using the larger swing mounted cymbals against the fixed plastic small quadrant shaped things I replaced.

Altho Im a larger drummer at 183cm and 90Kg, Im not a very hard hitter at all. Also, I use very light maple 5a sticks.

I dont “bash” cymbals or hit “through” them at all and I like to think Im more a “feel” player on my cymbals.

I dont like tiddly little cymbals! I use a range of large diameter (18″

and 20″) lightweight Paiste crash cymbals on my accoustic kit to be able to “open” the cymbal up easily and have them “swell” up into a crash with lighter hits rather than an explosive crash with big sharp attack delivered by smaller cymbals or heavier weight crashes and mediums in bigger diameters.

To recreate what I prefer, places quite a demand on the cymbal triggers not to mention the module itself to be able to set up get sufficient dynamics to cope with my lighter sticking, and not double trigger or suffer X-talk issues due to faily high cymbal gains and rack mounting and then still deliver both subtle low volume crashes and the big crashes with big hits when I ask the big question!

This is where the Visulites excelled and answered my every question relaying my sticking faithfully and I couldnt be happier with the results.

In fact, so happy that a month or so ago, I decided to ditch the last of my old single zone plastic crash cymbal pads in favour of a pair of shiny new 18″ Translucent Blue (of course) Visulite 2 zone crashes with chokes.

The Visulite 3 zone ride is responsive and expressive but on the light spring mount, tends to swing like mad at certain sticking speeds. I just remove the spring mount and use traditional felts to stop this on the ride.

On my personal wishlist, Id like to see the size of the bell area of the ride increased. Its a fairly small target to aim for and still get a consistent bell sound.

Lastly on my private wishlist, Id like to see a 20″ crash and ride cymbal added to the range to make us larger cymbal players happy. Id happily retrofit some to my kit now if I could get them!!

The Concertcast toms and Phoenix 14″ snare drum are constructed out of sturdy cast alloy, well finished in a matte black and are well built and quite heavy! They really appear to be designed and built to go the distance. Really professional stuff.

The toms bolted straight up using the existing hardware I had which was very handy. Simple threaded right angled levers to tighten up to existing “L” brackets of my old set.

They came fitted with Pintech single layer black mesh heads with a strike protector patch on the snare along with rim protector rubbers.

Any possible swinging or vibration of the toms is purely a result of the rigidity of the mounting system only so you pay your money and take your choice there. My clamps are that moulded plastic stuff and they cope reasonably well.

I couldn’t see in a million years of normal use any of the tensioning lugs or other hardware breaking unless the drum was actually dropped hard directly onto a lug from a fair height, hit with a large hammer or possibly thrown a long way in anger!

Would be nothing to weld back on and refinish in any case.

The only deterioration I have seen so far is with one of the foam trigger pads which has become misaligned and requires replacement but this is after several years of playing by the previous owner and it still triggers well enough to keep me happy.

TRS plug sockets are neatly flush with the shell and individual zone volume knobs close by and the TRS sockets are nice and tight so no chance of vibration and strange triggering issues.

Volume knobs are subtle looking, very smooth running and fairly tight and should stay put at whatever they are set at.

Like the toms, the snare has a wonderful solid, take whatever you could throw at it sturdy hand-made feel to it despite the shallow shell depth.

Feels solid and sturdy to play.

Even the small 8″ Concertcast feels and looks solid and built to last.

I like the way the drum triggers are wired with generic plugs making, in event of a failure, a changeover pretty straightforward!

Everything about the Pintech gear I have suggests to me that plenty of time and thought had gone into its design, development and production and everything has that wonderful “individually hand-made and built to last by craftsmen” solid and professional quality to it as opposed to an oriental like, mass produced, plastic-like impression which most mainstream branded kits give to me.

Plugging in to the trusty old Roland TD-10 module just required a small adjustment in gain. The Pintech triggers are pretty “hot” and deliver plenty of output!

The drums dont have much of “hot spot” issue around the trigger foam in the center of the batter head which is really pleasing.

I had a few issues with re-triggering of the snare at first but a lot of that came down to batter head tension being too loose and carefully setting the gain and re-trigger cancelling level controls. Still allows me to do press rolls without dropping lighter touches but not get any pesky re-triggering during ordinary play and not need to bother with additional dampening of the batter head to sort things out.

Very recently, I replaced the aging but faithful Roland TD-10 with a 2Box Drummit 5 module and allowing for the reduced trigger configurability of the 2Box, very little adjustment was necessary in the trigger screens to get an even richer and and more expressive drumming experience with the much more technically correct and live sounding 2Box drum samples!

My E-kit is now a very close approximation of the sometimes very processed drum sounds from back in the 80’s that retro show is built on and looks very cool as well!!

Im seriously happy with how well the hardware is manufactured and how well everything triggers.

Dealing with Pintech is a breeze and its a very nice touch to have the actual owner of a manufacturing business, Ryan Guard, being so willing to get involved at customer level.

When you live in a faraway place such as Tasmania, which is a small island state below mainland Australia, to have the head honcho of Pintech reply promptly to your emails and questions in person is outstanding customer service, given Im just one obscure buyer in a very large world of buyers!

So great kudos and respect to Ryan for making me feel valued as a personal customer, amongst legions of customers he must deal with daily, rather than a distant one-off  quasi-nuisance via email.

My items were well packed when they arrived and I was kept informed via email of their transport progress.

Thanks to all at Pintech for an excellent experience. 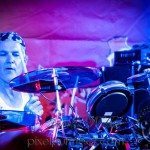 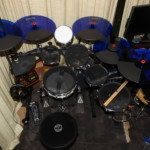